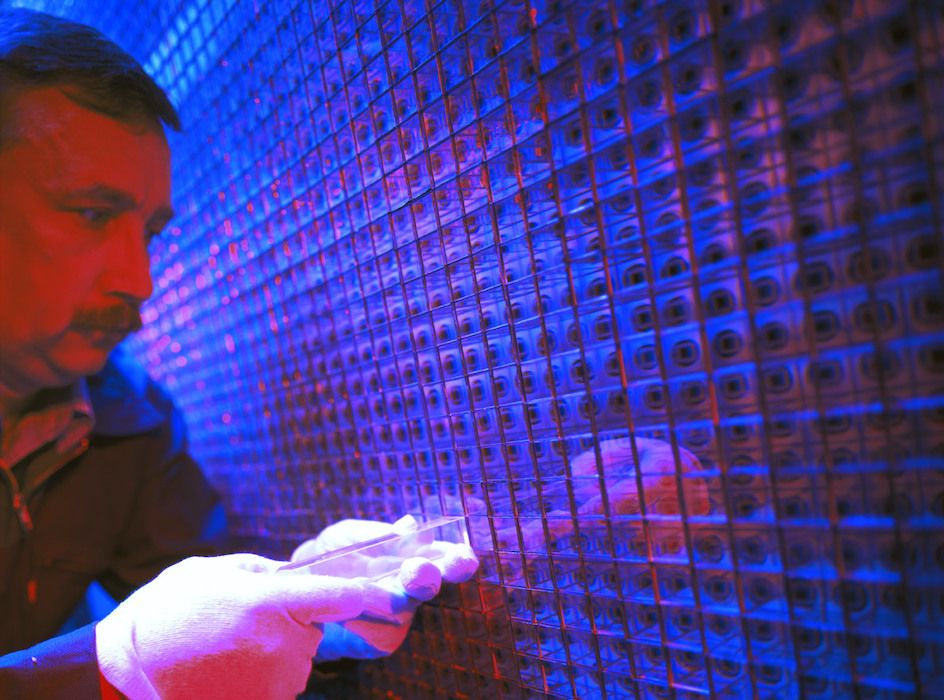 PHOS is a high-resolution electromagnetic calorimeter which measures the photons coming out of the extremely hot plasma created in the lead-lead collisions at the LHC. PHOS covers a limited acceptance domain at central rapidity. It is made of lead tungstate crystals read out by avalance photodiodes.

When high energy photons strike lead tungstate, they make it glow or scintillate, and this glow can be measured. Lead tungstate is extremely dense (denser than iron) and stops most photons that reach it. The crystals are kept at a temperature of 248 K, which helps minimize the deterioration of the energy resolution due to noise and optimize the response for low energies.

The Charged-Particle Veto (CPV) detector is designed to suppress detection of charged particles hitting the front surface of the PHOS. The CPV consists of four separate modules, each of them placed on top of one PHOS module. The physical requirements on the CPV are the following:

The detector based on the MWPC with pad readout and Ar/CO2 gas mixture ful lls all the above requirements. In particular due to the absence of hydrogen in the operating gas the CPV will have low sensitivity to neutron uxes. The CPV modules are positioned at approximately 5 mm upstream of the PHOS modules. In offline charged particle hits in the veto planes are projected onto the PHOS modules, and for each hit the corresponding region in the PHOS is marked as a ected by charged particle. The showers in the PHOS with coordinates in these regions will be then rejected as produced by charged particles.

The prototype of the CPV detector was designed and produced during summer | autumn of 1998. Low-mass construction materials were used for the production to minimize radiation length, material budget and detector weight. It was made as a plane structure with dimensions 18 18 cm2 lled with eight proportional tubes equipped with cathode pad readout based on the GASSIPLEX chip as front-end electronics. The key element of the CPV construction is lithographically produced pad cathode. 0.8 mm thick cooper-clad G10 foils was used to form the cathodes of proportional tubes, the outer and inner cooper cladding play role of the detector electromagnetic shield and cathode sheet with a fine pad structure. Transversal (relative to the anode wires of prototype) cross section of each tube is rhombus shaped with small deviation from a square, in order to improve spatial resolution in the direction transversal to the anode wires. The wire pitch is 2:2 cm. The cathode pad sizes, 2:2 2:2 cm2 , are the same as the transversal dimensions of the scintillating crystals in the PHOS. The other main parameters of CPV prototype are as follows: