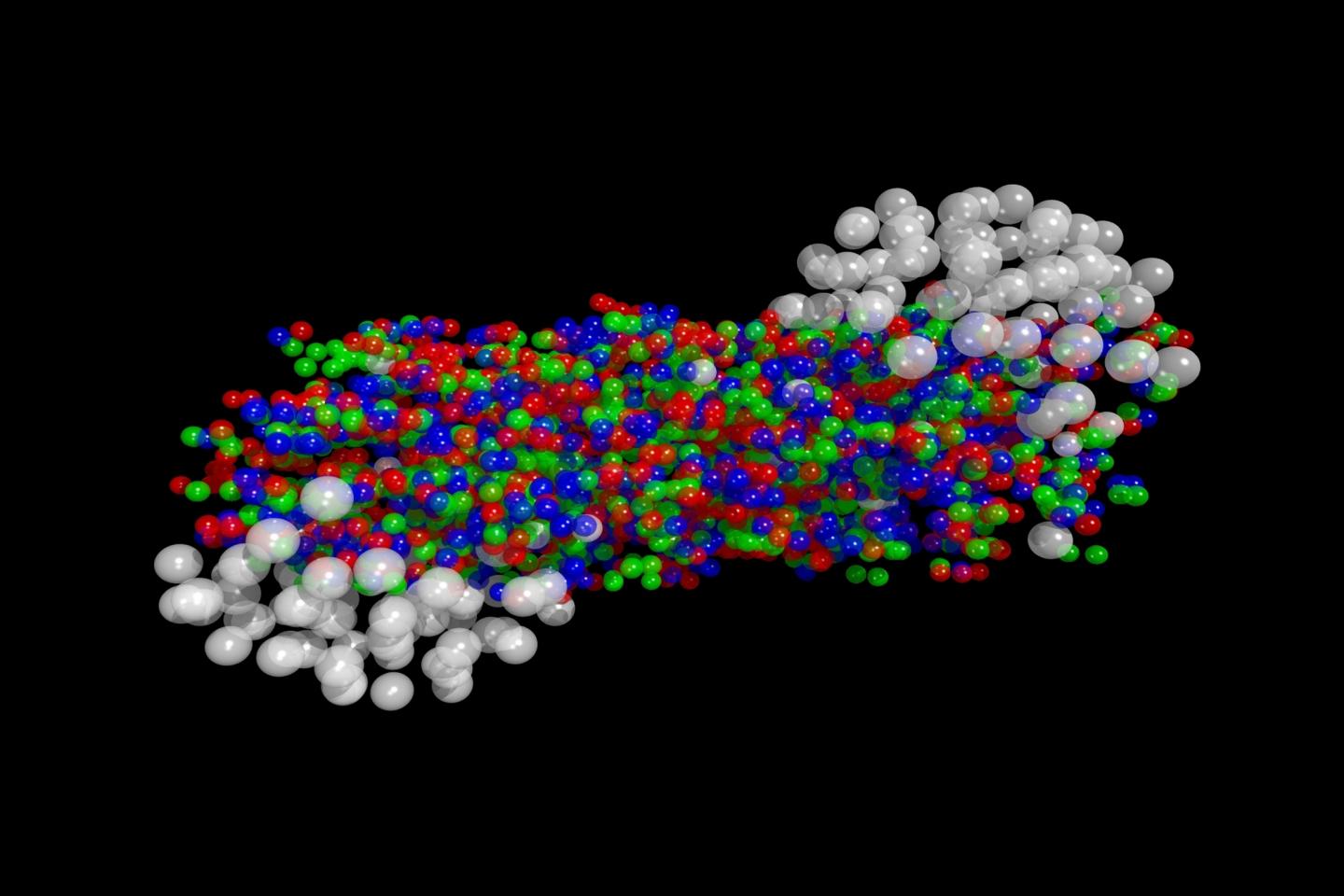 Ordinary matter is made up of atoms, each of which consists of a nucleus surrounded by a cloud of electrons. Nuclei consist of hadrons (such as protons and neutrons), which in turn are made of quarks. The force between quarks is carried by gluons (from the word ‘glue’), which, like photons, are massless. Quarks are bound together in hadrons by the strong interaction mediated by gluons. The strong interaction is one of the four fundamental forces.

There are six different kinds of quarks with a wide range of masses named: up, down, charm, strange, top, and bottom. The up and down quarks are found within the protons and neutrons. The protons are made up of two up quarks and one down quark, and the neutrons are made up of two down quarks and one up quark. Quarks carry fractional charges. For example, an up quark has charge +2/3 and a down quark has a charge of -1/3. This can explain the charges of protons and neutrons. Each of the six flavours of quarks can have three different colours (red, blue, or green). The colour term is introduced to label a different property of the quarks because of which similar quarks can reside in the same state.

Gluons, in contrast to photons, also have the property of colour charge, consisting of a colour and an anticolour. This colour force is a force that acts between quarks. This property is what makes the colour force so complex and different from other forces. Scientists have identified four fundamental forces of nature, with rather different properties. These are: No isolated quark has ever been observed: quarks, as well as gluons, seem to be bound permanently together and confined inside hadrons. This phenomenon is known as confinement. It relates to the fact that, in addition to an electric charge (which is a fraction of the electron's one), each quark has a colour charge, which can only take 3 values (red, blue, or green).  For normal conditions of temperature and density, quarks only exist within hadrons - aggregates of two or three quarks that are colour neutral (i.e. white). The two main types of hadrons are the mesons (one quark, one antiquark) and the baryons (three quarks).

Confinement is also the fundamental property that gives each hadron a mass much larger than the sum of the masses of its constituents: in fact, confinement generates about 99% of the nuclear mass.

In the bag model, the quarks are confined in an elastic bag, which allows quarks to move freely around within the bag. The colour force has almost no effect at short distances. Thus, inside the hadrons, the quarks behave like free particles. This phenomenon, known as asymptotic freedom, was discovered in 1973, for which David Politzer, Frank Wilczek and David Gross were awarded the Nobel Prize in Physics in 2004. Now let us see what happens when we try to pull the quarks from each other and try to make those free. The colour force, which is weak at short distances, becomes stronger and stronger with the increase of distance between the quarks. The force increases roughly at the rate of about 1 GeV per fermi (1 fermi = 10-15 m). As we try to pull the quarks further apart, the bag gets stretched, and at some point the string (colour field) connecting the quarks breaks. The energy required to separate the two quarks is enough to produce quark-antiquark pairs. These quarks combine to form new hadrons, and get confined. Because of this, it is almost impossible to isolate a quark. It may be possible to compress and heat up the matter to such an extent that their individual protons and neutrons superimpose with each other creating regions where free (de-confined) quarks and gluons exist for a short time. This form of matter called the quark-gluon plasma (QGP) is a state of matter wherein quarks and gluons are no longer confined in hadrons.  Such a state has been predicted by the current theory of the strong interaction (called quantum chromodynamics, QCD) for very high temperatures and very high energy densities.

Such extreme temperatures have not existed in nature since the birth of the Universe: it is believed that for a few millionths of a second after the Big Bang the temperature was above the critical value, and the entire Universe was in a quark-gluon plasma state. The phase transition to QGP matter

The transition from the QGP state to that of the hadronic matter (and vice-versa) can be understood in terms of a simplified diagram. The x- axis in the figure shows the net baryon number density, which is the amount of energy needed to add/remove a baryon (a class of hadrons with three quarks) to the system. This is analogous to pressure in the phase diagram of water. The y-axis shows the temperature in MeV (1eV is roughly 11605 Kelvin). Below the phase transition line, we have the hadron gas and above we get the QGP stage. 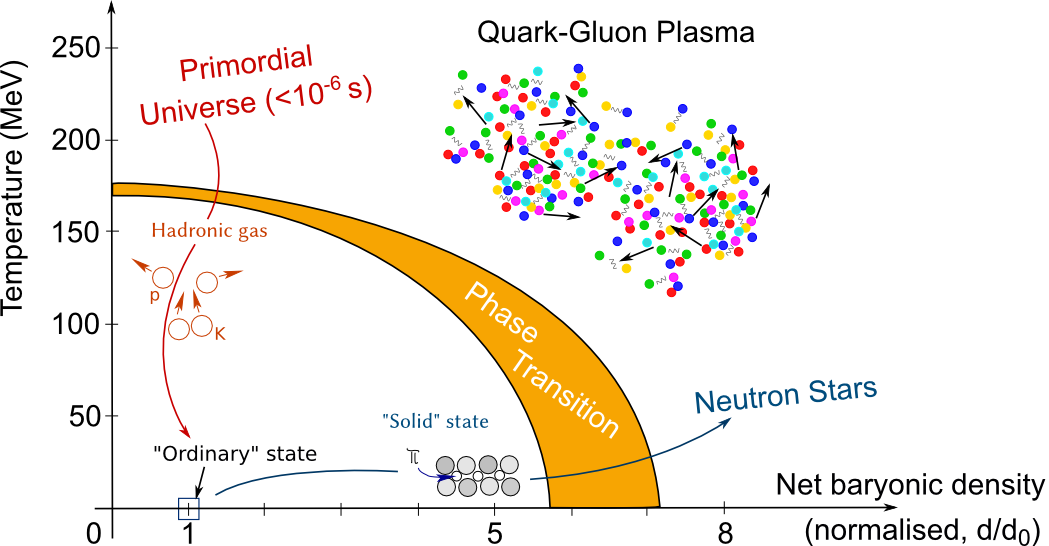 The Universe, in its early stage, followed the profile along the y-axis (from very high to low temperatures) at zero net baryon number density. At a critical temperature of 160 MeV, there is a phase change from quark-gluon plasma to hadron gas. On the other hand, at low temperatures and high values of baryon densities, we get to matter similar to what may exist in the interior of the neutron stars (a very large collection of neutrons, typically a few kilometers in diameter, which is held together by gravity). Theorists predict that a neutron star of a large enough mass could be of high enough density to contain QGP matter. To recreate conditions similar to those of the early universe, powerful accelerators have been built, which deliver head-on collisions between massive ions, such as gold on gold nuclei or lead on lead nuclei. In these heavy-ion collisions, hundreds of protons and neutrons from these nuclei smash into one another at energies of a few trillion electronvolts each. In the process, it is possible to compress and heat the colliding nuclei in a way that their individual protons and neutrons superimpose with each other. Hence, a region of high energy density could be created, consisting of regions where a relatively large number of de-confined quarks and gluons existed for a brief time. Thus, the extreme energy density causes the QGP formation. The QGP state quickly cools down until the individual quarks and gluons recombine into a blizzard of ordinary matter that speeds away in all directions.

The detectors of ALICE are designed to efficiently detect the particles produced in such lead-lead collisions at the LHC.

ALICE is optimized to study collisions of nuclei at the ultra-relativistic energies provided by the LHC. These collisions offer the best experimental conditions to produce the quark-gluon plasma. Such conditions are believed to have existed up to a few millionths of a second after the Big Bang before quarks and gluons were bound together to form protons and neutrons. Recreating this primordial state of matter in the laboratory and understanding how it evolves allows us to shed light on questions about how matter is organized and the mechanisms that confine quarks and gluons.