ALICE estimates transparency of the Milky Way to antimatter 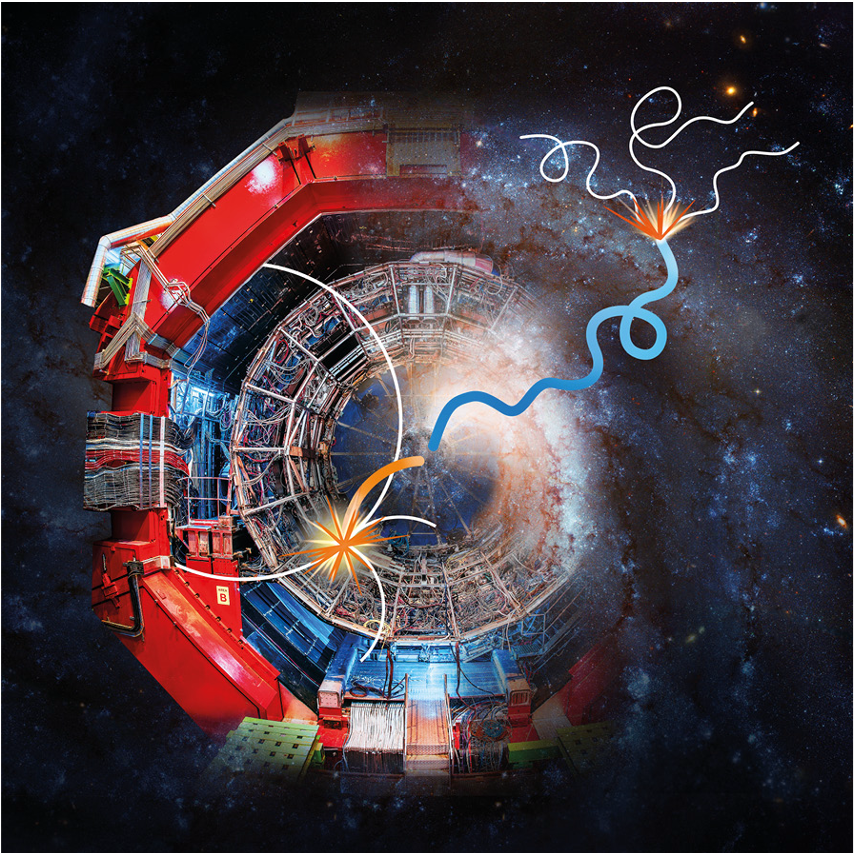 An artistic blending of the absorption of an ordinary antinucleus produced at the LHC in the ALICE detector material (left side, orange trajectory) and an antinucleus from dark matter produced at the centre of the Galaxy and absorbed in the interstellar space (right side, blue trajectory). Figure credits: ORIGINS Cluster, Technical University Munich.

While the nature of dark matter (DM) remains unknown, the search for anti-nuclei in space is a very promising channel for its discovery in the near future. Various models predict that low-energy antinuclei, such as anti-3He, stemming from DM are essentially free from the background originating from ordinary collisions between cosmic rays and the interstellar medium. The inelastic interaction probability of anti-3He in the interstellar medium is an essential ingredient for calculations of the anti-3He flux near Earth.

The anti-3He inelastic interaction cross section was measured for the first time, using the ALICE detector material as an effective target. The results are described by the parameterisations used in Geant4 within two standard deviations. The measurement was used to estimate the transparency of our galaxy to the propagation of anti-3He, with the GALPROP code and a standard set of propagation parameters. It has been found that anti-3He nuclei can travel long distances of several kpc, with about 50% of nuclei produced in DM annihilation reaching the near-Earth environment. For the nuclei stemming from the cosmic-ray background the obtained transparency varies with increasing anti-3He momentum from 25% to 90%. The uncertainties associated with the anti-3He absorption are about 10-15%, representing a large improvement in the knowledge of the anti-3He inelastic interactions - previously it was not possible to quantify the uncertainty due to the lack of measurements.

Figure gives a schematic representation of the inelastic processes within the ALICE detector and steps followed for the extraction of cross section:
(a) Representation of the ALICE detectors at midrapidity (in the plane perpendicular to the beam axis) with a 3He undergoing annihilation in the TPC gas (in red) and a 3He that does not undergo an in- elastic reaction and reaches the TOF detector (in green).
(b) Identification of (anti)nuclei by means of their specific energy loss dE/dx and momentum measurement in the TPC. The red points show all (anti)3He nuclei reconstructed with the TPC detector, green points correspond to (anti)3He with TOF information; other (anti)particles are shown in black.

Results for σinel(3He) obtained from pp collisions at √s = 13 TeV (left) and from Pb–Pb collisions at √sNN = 5.02 TeV (right). The dashed curves represent the GEANT4 cross sections corresponding to the effective material probed by the different analyses. 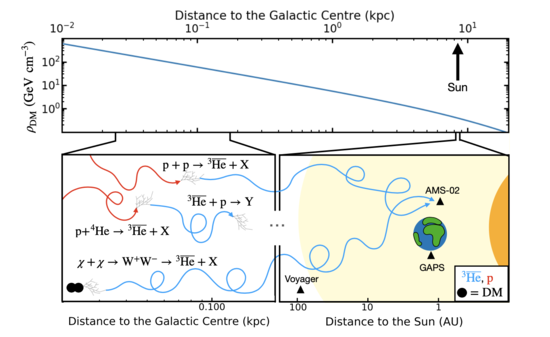 (Upper Panel) Dark-matter distribution in our galaxy as a function of the distance R from the galactic centre according to the Navarro–Frenk–White profile. (Lower panel) Graphical illustration of the 3He production from cosmic-ray interactions with the interstellar gas or dark-matter (χ) annihilations. The yellow halo represents the heliosphere, Earth, Sun, and the positions of the Voyager 1, AMS-02, and GAPS experiments are depicted as well.

Expected 3He flux near Earth before (left panel) and after (right panel) solar modulation. The latter is obtained using Force Field with modulation potential φ = 400 MV. Upper panels show the fluxes for dark-matter signal χ (in red) and cosmic-ray background (in blue) antihelium nuclei for various cases of inelastic cross section used in the calculations. Bottom panels show the transparency of our galaxy to the propagation of 3He outside (left) and inside (right) the Solar System. Shaded areas on the top right panel show the expected sensitivity of the GAPS and AMS-02 experiments. The top panels also show the fluxes obtained with σinel(3He) set to zero. Only the uncertainties relative to the measured σinel(3He) are shown.