An illustration of the effect of quark–gluon plasma on the formation of charmonia in lead-nuclei collisions. When the plasma temperature increases, the more weakly bound ψ(2S) state is more likely to be “screened”, and thus not form, due to the larger number of quarks and gluons in the plasma (the coloured circles). The increase in the number of charm quarks and antiquarks (c and c̄) can lead to the formation of additional charmonia by quark recombination.

Quark–gluon plasma is an extremely hot and dense state of matter in which the elementary constituents – quarks and gluons – are not confined inside composite particles called hadrons, as they are in the protons and neutrons that make up the nuclei of atoms. Thought to have existed in the early universe, this special phase of matter can be recreated at the Large Hadron Collider (LHC) in collisions between lead nuclei.

A new analysis from the international ALICE collaboration at the LHC investigates how different bound states of a charm quark and its antimatter counterpart, also produced in these collisions, are affected by quark–gluon plasma. The results open new avenues for studying the strong interaction – one of the four fundamental forces of nature – in the extreme temperature and density conditions of quark–gluon plasma.

Bound states of a charm quark and a charm antiquark, known as charmonia or hidden-charm particles, are held together by the strong interaction and are excellent probes of quark–gluon plasma. In the plasma, their production is suppressed due to “screening” by the large number of quarks and gluons present in this form of matter. The screening, and thus the suppression, increases with the temperature of the plasma (see illustration below) and is expected to affect different charmonia to varying degrees. For example, the production of the ψ(2S) state, which is ten times more weakly bound and 20% more massive than the J/ψ state, is expected to be more suppressed than that of the J/ψ state.

This hierarchical suppression is not the only fate of charmonia in quark-gluon plasma. The large number of charm quarks and antiquarks in the plasma – up to about a hundred in head-on collisions – also gives rise to a mechanism, called recombination, that forms new charmonia and counters the suppression to a certain extent (see illustration). This process is expected to depend on the type and momentum of the charmonia, with the more weakly bound charmonia possibly being produced through recombination later in the evolution of the plasma, and charmonia with the lowest (transverse) momentum having the highest recombination rate.

Previous studies, which used data from CERN’s Super Proton Synchrotron and subsequently from the LHC, have shown that the production of the ψ(2S) state is indeed more suppressed than that of the J/ψ. ALICE has also previously provided evidence of the recombination mechanism in J/ψ production. But, until now, no studies of ψ(2S) production at low particle momentum had been precise enough to provide conclusive results in this momentum regime, preventing a complete picture of ψ(2S) production from being obtained.

The ALICE collaboration has now reported the first measurements of ψ(2S) production down to zero transverse momentum, based on lead–lead collision data from the LHC collected in 2015 and 2018.

The measurements show that, regardless of particle momentum, the ψ(2S) state is suppressed about two times more than the J/ψ. This is the first time that a clear hierarchy in suppression has been observed for the total production of charmonia at the LHC. A similar observation was previously reported by the LHC collaborations for bound states of a bottom quark and its antiquark.

When further studied as a function of particle momentum, the ψ(2S) suppression is seen to be reduced towards lower momentum. This feature, which was previously observed by ALICE for the J/ψ state, is a signature of the recombination process.

Future higher-precision studies of these and other charmonia using data from LHC Run 3, which started in July, may lead to a definitive understanding of the modification of hidden-charm particles and, as a result, of the strong interaction that holds them together, in the extreme environment of quark–gluon plasma.

The RAA for ψ(2S) and J/ψ as a function of pT. Comparison with theory models and results from the CMS experiment are also shown. 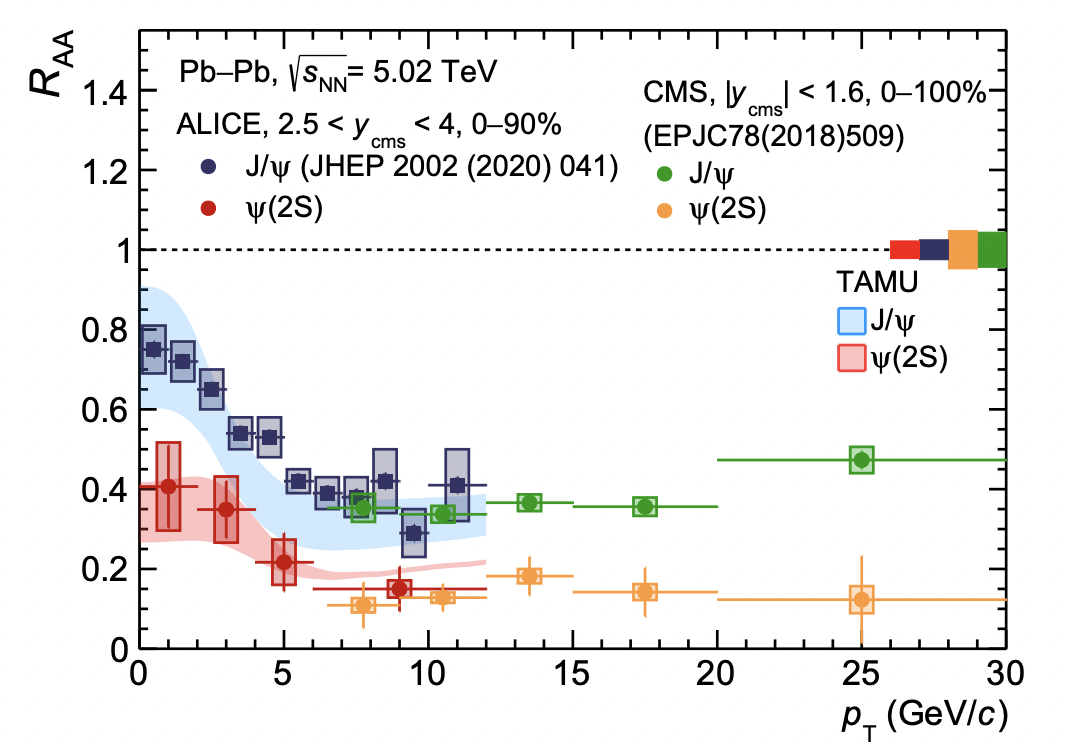